You cannot trust anything or anyone these days, right? You may or may not install an app on your Android device, but installing an AntiVirus is a must, and it must be given utmost importance to protect your device from malware attacks. 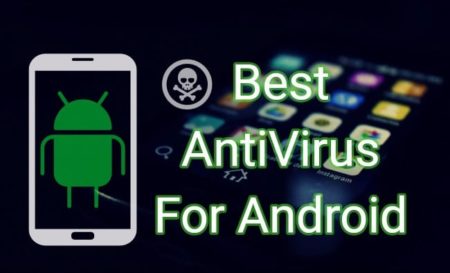 When it comes to Android, the users download the files from Play Store directly which are safe to download if your security settings are enabled before downloading. But there are no restrictions for Virus to enter into your device or for that matter, any device. It may come at any moment while downloading your file even with the security settings enabled.

This article is going to take you to show the 12 Best Antivirus for Android. We have tried and tested everything and made sure the list is perfect to use. Here we go!

Avast powers AVAST Mobile Security. It is a very familiar name in the stream of Antivirus for mobile phones and Personal computers. This antivirus app has got more than a hundred million installs all over the world so far and still going strong in its verticle. 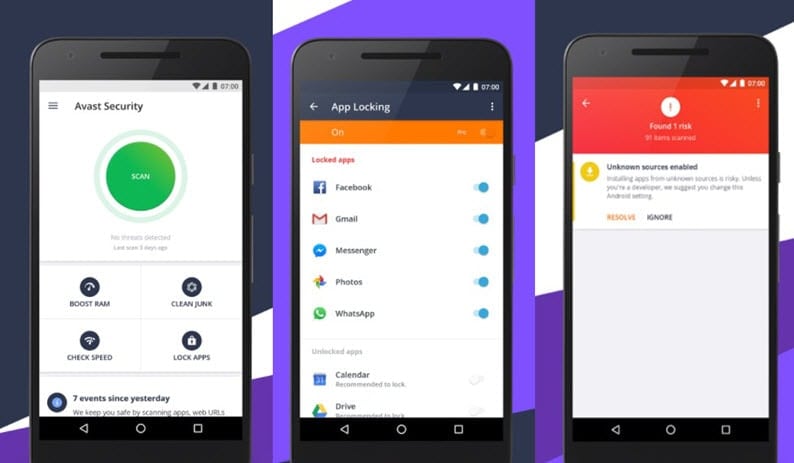 It is considered as the most popular brand in the stream of anti-viruses. The features that this app gives to secure your android device are, database updates, anti-theft features, and the ability to remote lock the device in case it is theft anytime.

It is always suggestible to have your security checked after buying a device. The pro version of this tool provides you with additional features like data recovery, app locking, Ads detection, geofencing and many as such. It has got many other options that you will love to have it on your device.

Avira is a well-known player when it comes to Antivirus. Avira Antivirus security is a very well known name in the vertical of antivirus. Most of us might have tried it in our personal computers, and we are aware to an extent how it works when it comes to protecting an electronic device from antivirus. 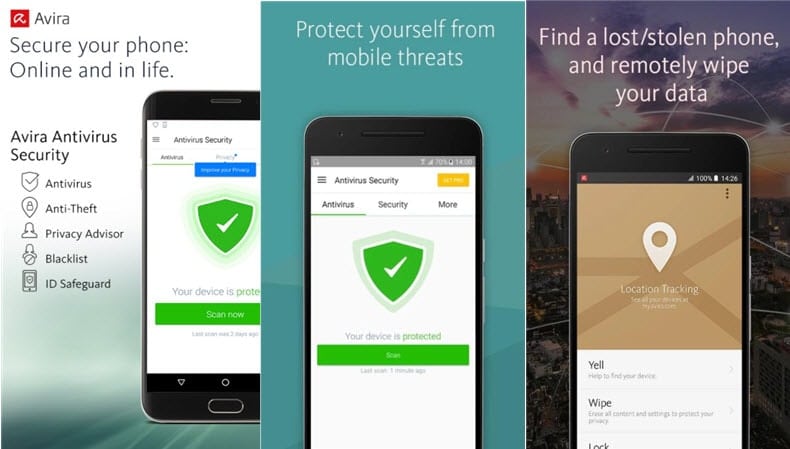 The functioning is same as for a PC. As we know, it comes with the necessary tasks like scanning the stuff in your Android device, real-time protection, and examines the USB devices that you connect to transfer the data. This app has got many other features that include privacy features, blacklisting website features, device admin as such.

Though the size of the app is quite substantial, it doesn’t feel in the way of the burden to your device. Moreover, it takes away the crap and keeps it clean. With an affordable price of $11 per year, Avira is worth having in your Android device.

360 Security app for antivirus is an app which is worth your time and efforts to keep Virus away from your device and it is free. 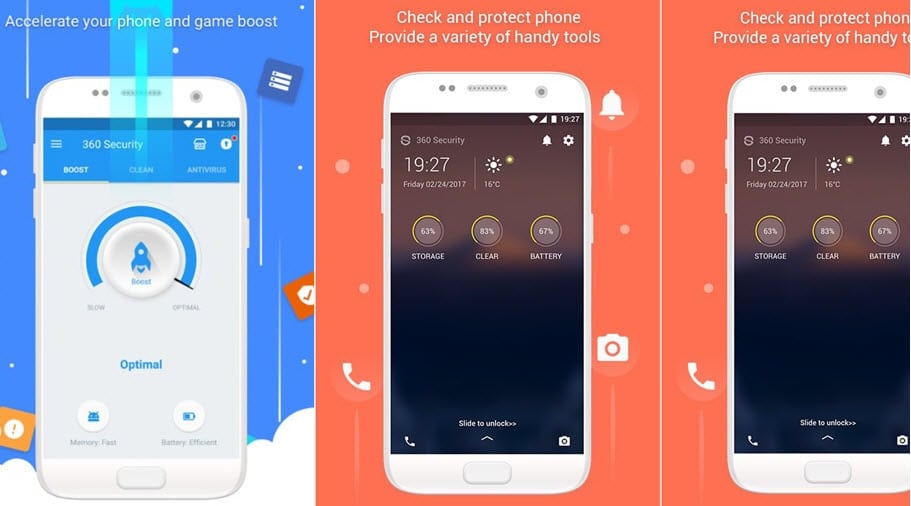 More than one hundred million downloads, ten million reviews and ratings on this app says much about how it works. 4.6 is an average rating of this app, and this means how good it is when it comes to protecting your device. Not just these, there are many features in this app that attract you which includes scanning the device for malware.

Another feature it provides is the app locking facility where you can lock every other app on your phone to be protected with a password making it hard for everyone else to open it. App cleaner and Booster service are present in this tool where you can clean the crap stuff from your device that slows down the functioning of your phone. So, it is worthy to install.

If you so secured about your Personal Computer, then you must be knowing AVG AntiVirus Security. It is a top-rated app in that genre where it has got lakhs of reviews and millions of downloads.

An estimation says that it has reached over a hundred million downloads till date and it has got a fantastic rating of 4.4 on the Google Play Store. Various features suit to have it on your devices such as real-time protection, scanning of the device, and constant updates on the virus on your device.

It stops the malware attacks from entering the Android device. You can also manage the battery usage and data usage on your device. App locker protects your device from unwanted people using it and helps you in tracking the device in case if it is theft.

The User Interface deserves a special mention here since it is better compared to the other apps where it takes time for a user to get habituated it. The price is very affordable if you are serious about the data on your Android mobile device.

Antivirus and Mobile Security by Trust one such apps which are easy to understand and is easy to access to the cell phone to protect from any malware. It has the fundamental features like looking for current threats by scanning the device, just like how every other app does.

Apart from a primary feature like this, it has a unique way of looking for threats while protecting the device in real-time and guard the privacy which in turn helps the user to show what kinds of apps the phone is using for permissions.

Unsaid features in the app include backup facility, find my phone feature and system manager. Though it is not as massive in size as many of its competitors, you will find it useful in many instances while using it. Above all, it is free of cost.

CM Security is one of the old players in the antivirus vertical. It was effected with some virus attacks sometime back when it was a key player, and there was no significant competition.

Also, it was the best option available back then. Even now, the app has got excellent protection to it as well as to the devices. Thanks to the competition are increasing in the antivirus tools where you need to improve yourself to stay in the contest.

This is what happened in the case of CM Security. It is now ranked for the top spot on AV-Test consistently for a few years currently.

Speaking about the features, it has got some of the best and must have features like, app locker, takes the pics of the people who touch your mobile without your conscience. This free app is a must try on your mobile.

Bitdefender Antivirus Free has to be considered as the app in the list that is easy to handle. It has got some unique options in it such as, cleaning and scanning the device and then give you the real-time defense from the antivirus which I consider as the most critical feature an app must have.

It has scan regularly to the apps on the device and thus preventing the unnecessary usage which in turn leads to controlling the security of the Mobile. Also, most importantly, it is very light on the mobile, and no doubt one prefers the light version than that of the heavy version anytime. Above all, this app comes for free of cost.

You might have probably reading AndroHelm Mobile Security app for the first time. This is not a favorite app like many others in the lists of the internet, but the benefits generated by this app are fantastic. The app can provide security for a real-time protection of your Android phone and spyware.

It can scan the apps on your device and often gives you updates from an anti-virus. The other features of this app include backup of data in your device, protecting from virus and much more. The essential characteristics of this app are that lets you remotely delete the unnecessary stuff and blocks the unwanted data from entering your device.

Though the cost looks away from the normal, it is worthy to have it since the functionality of this app works promisingly.

Dr. Web Security Space deserves a place in this list for its high and powerful protection from antivirus for android devices that don’t come up with a massive clutter or bloat. It was a straightforward antivirus app when it was started a few years back.

Now, it is an updated version of the app which has got many features to protect the device like anti-theft features, remote wiping, custom remote messages, a cloud checker to check whenever you save the data on the cloud as a backup.

This app also always have an eye on the apps you are using on your device. The basic version of the app comes for free, and it is the best free app that an Android user can have on the phones.

Lookout is one of the first apps that strike to anyone who is using Android devices, especially if you are in the US, it is listed and installed on many Android devices in T-Mobile devices, which is widely in the country.

We tested the app and found out it works quite well from its competitors, and hence it deserves a place in this list of the best apps.

Sounds quite expensive, but it is worthy to have it on your device. It is lighter in use and faster in detecting viruses entering into your device and stopping them and the damage.

This is yet another popular antivirus program that is frequently used on a PC. Eset Mobile Security and Antivirus have the record of stopping 100% virus in the year 2015. The app has got some frequent updates in the database where it is tried in 2016, and you can try in 2017 as well.

The basic version of this app comes for free of cost, but you need to pay $9.99 per year for the premium account. The premium account consists of features like applocker, Anti-theft features and some more advanced security features that are unique and must in an Android device. It is considered as one of the most trusted apps out there. These all are the best Antivirus for Android in 2019.

That’s if buddies. Hope, you’ve got what you are looking for!. Please, do share your thoughts about this articles in the comments sections and also share this article with your friends on Social Media.